Antique Chinese Statues of History and Their Magnificence

It is a well known fact that Chinese sculptors and artisans are among the most talented in the industry, and what came out of their hands are magnificent antique Chinese statues in bronze, jade, lacquered wood, porcelain, pottery and many other materi

als that  are often considered antiques or collectibles. Most amazingly, most of these statues are only created once, and there are rarely duplicates, which made them even more valuable.

Many of these antique Chinese statues were created with symbolic significance; usually they were religious or historical men, women or children, such as deities, emperors or empresses,  poets, famous scholars, warriors, legendary figures, celestial bodies or mythological creatures and so on. Collectors love to buy statues of poets and scholars for their home as it symbolises wisdom and literacy, and can inspire their children in their education. Statues of children were then given as welcome or good luck gifts in the past, especially to newly wed couples to quickly bless them with a baby. Other statues were made for funerals, and in this case, most of them were commissioned by wealthy families so that the deceased would not proceed to the afterlife alone.

One of the most common statues ever to have been made was the Buddha. Most of them showed him as serene and in relaxed sitting postures, which most collectors love as they bring peace and calmness to their families. The earliest statues would showed the Buddha being accompanied by two Bodhisattvas, or supported by ‘stone or guardian lions’, or more likely ‘Foo dogs’ or ‘Fu dogs’, with magical powers.

Antique Chinese Statues and Their Dynasties

Antique Chinese statues are best considered by the dynasties in which they were made, as they used different materials and methods through reign of different dynasties. The most notable dynasties were Zhou, Tang and Song Dynasties. The others include Shang, Qin, Western Han, Xin, Eastern Han, Three Kingdoms, Liao, Jin, Yuan, Ming and Qing Dynasties.

Vastly different from the Japanese, most of whom liked to use metal in their art, the Chinese especially loved to use jade in their statues and sculptures, as to them, jade is a precious stone that links the physical and spiritual realms. Because of this, it has been crafted into well known figures, flowers and plants, landscapes, mythological creatures and gods and goddesses, as well as symbols of prosperity and good fortune, for instance. The most famous jade ever made is the ‘ruyi’ (如意), a curved ornament with a long S-shaped handle and a head that looks like a fist or a cloud. It is a wand used  in rituals in Chinese Buddhism, and it also symbolizes power and good fortune in Chinese folklore, besides its ability to bring power, wealth and leadership.

The Chinese masters often used bronze too, particularly in the Zhou Dynasty (周朝) (1046-256 BCE), the longest-lasting of China’s dynasties, when it was very well developed, resulting in many clay figurines and statues of famous people and animals in bronze, silver and gold, all with detailed carvings. Besides such statues, some of such Chinese bronze works can be found in weapons, ritual vessels, and jewellery.

After that came the Tang Dynasty (唐朝) (618-907) where Buddhist art was developed to its highest form, and stone was a favourite medium for religious sculpture and the masters replaced bronze with iron in the figures. It must be noted that Dongyang woodcarving, from Dongyang county, which started from the this dynasty and later became popular in the later dynasties, is revered by many collectors.

After the Tang Dynasty, the Song Dynasty (宋朝) (960-1279) saw the decline of Buddhism and the loss of popularity of such figurines and statues. But there was an increase in the production of Bodhisattvas statues, especially Avalokiteshvara, or most popularly known as ‘Guanyin’ or the Goddess of Mercy and Compassion, and Manjushri, Wenshu, which represents spiritual wisdom.

The Qing Dynasty (清朝) (1644-1911), also called the Manchu Dynasty, saw an abundant supply of raw materials, especially stone, and hence, more statues made of stone were produced. The rich families of this dynasty also loved Jadeite, a very rare raw material that are usually in blue, lavender-mauve, pink or emerald-green, was imported from Burma to China after 1800.

Lastly, it has always been a bit difficult to pinpoint a specific dynasty for porcelain, however, as there had been disputes about when the first Chinese porcelain was made. It was said that either the late Eastern Han period (100-200AD), the Three Kingdoms period (220-280AD), the Six Dynasties period (220-589AD) or the Tang Dynasty was the birth period of the first Chinese porcelain, though there were no proper evidence. Chinese porcelain combines kaolin, pottery stone, feldspar and quartz, and includes all ceramic ware that is white and translucent.

Stone, wood and pure copper were also popular in the Qing Dynasty, mainly in architecture, furniture and artworks. Sculptors used wood such as pine, China fir, camphor tree, nanmu or gingko, while copper was often mixed with other materials such as tin or zinc for added strength. Brass is also often used during this period and due to its bright appearance, artists like to use it to represent gold in statues.

Many Chinese statues have graced the homes of the Chinese since ancient times, and also influenced their style of architecture, language, artwork and everyday objects. Below are some of the more popular Chinese statues.

The Buddha, also known as Shakyamuni or Siddhartha Guatama, was the spiritual leader on whose teachings Buddhism was founded. He is believed to lived between the 6th and 4th centuries BCE in India. In China, Buddhism started around 1000 AD and since then, there have been many imagery of Chinese influence and traits in various Buddha statues.

Dragons are legendary four-legged creatures that are usually scaled or portrayed as sprouting huge amount of fire from their mouths. Every dragon possesses some traits or characteristics of serpents or reptiles, and are featured in many myths and folklores.

In China, they are the ultimate symbol of cosmic Chi (energy) and symbolises potent and auspicious supernatural powers. Dragons are considered ‘Yang’ in the Yin Yang terminology, and usually complements a Yin Phoenix in artpieces, statues and illustrations.

A phoenix is a long-lived, mythical bird with the face of a swallow, the beak of a rooster, the forehead of a fowl, the neck of a snake, the breast of a goose, the backside of a stag, the back of a tortoise and the tail of a fish. To the Chinese, the phoenix only appears in places that are blessed with peace, prosperity or happiness, so the photos of phoenixes are often used as the backdrop of auspicious events such as wedding ceremonies or birthdays.

Tiger statues are said to represent ferocity, dignity and courage, very much like their real animal counterparts. Often respected as the God of Wealth in most areas of China, and as a symbol of protection, the Chinese loves to place statues of ferocious tigers outside their homes.

Caring for Your Antique Chinese Statues

Antique Chinese figurines and statues are known for their quality and beauty, and how then, should you take good care of yours? The passage of time may have altered the colours of yours, but please do not try to enhance or touch up the colours yourself as it would do great harm to the value of your statue. It is best to keep it as it is, and also do avoid using any special or harsh soap or cleaners other than mild soap and water to clean it. If possible, consult a professional to check what is the best cleaning method. Often, less is more, and the best solution is to leave it alone. To keep your statues in tip top condition, also purchase a glass display to keep out dirt and grime.

Finally, as with any antiques or collectibles, do be careful of fakes and reproductions when you choose antique Chinese statues, as there is a long history of craftsmen copying the designs and features of earlier statues, and such statues continue to be made today, even in increasing numbers. Also, when collecting statues, you may want to consider collecting only a certain type of statues, such as deities or poets, for instance. Once all these information are in place, you are then well prepared to go treasure hunting for antique Chinese statues. 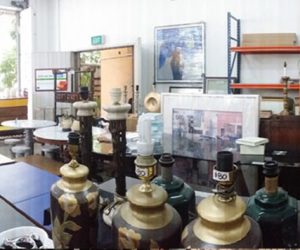